Although Some Countries Lobbying, Execution of Drugs Convicts Will Remain to be Implemented 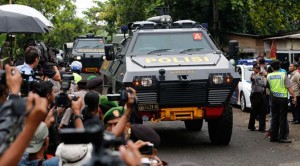 The atmosphere when the death row inmates of drug brought to Nusa Kambangan Island, Central Java

Cabinet Secretary, Andi Widjajanto said that Indonesia will remain carry out thedead execution, although some countries through their embassies to lobby the cancellation of the execution.

Re implementation plan of the dead execution of the drug dealers that will conducted in the near future, further Cabinet Secretary, will be reported to the President Joko Widodo in plenary cabinet meeting.

“(Dead Execution) will be reported in a cabinet meeting,” Andi told to reporters when going to follow the plenary cabinet meeting at the Presidential office in Jakarta, Wednesday (4/3).

While the Coordinating Minister for Political, Legal and Security Edhi Purdijatno argued, until now still there are some countries that lobbying, but President Joko Widodo still in his stand not to grant a pardon or clemency to death row inmates of the drug.

When asked the execution time of the second phase of death row inmates of drug, Coordinating Minister for Political, Legal and Security does not mention the exact. “Do not ask the time, will be implemented as soon as possible,” he said.

A number of mass media reported in this execution of the second stage, the Attorney General will execute 11 death row inmates that had rejected a clemency petition.