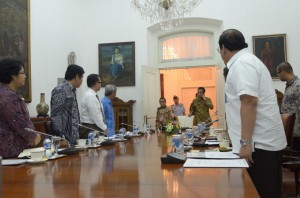 President Jokowi entered the meeting room in order to lead the preparatory meeting of the 60th Commemoration of KAA, in Bogor Palace,  Tuesday (17/2)

“I think there is still enough time for us to prepare well,” the Head of State said.

Present in the meeting, among others, Minister of State Secretary, Pratikno; Cabinet Secretary, Andi Wijayanto; Chief of Presidential Staff, Luhut B. Pandjaitan; and Deputy Minister of Foreign Affairs, AM. Fachir.

“The government of Indonesian invited 109 delegations Asian and African countries, and the ambassador representatives to attend of both events,” Retno said, after the limited cabinet meeting at the presidential office in Jakarta, Friday (9/1) ago.

According to the Minister of Foreign Affairs, the Asian-African Summit will consist of several meetings, ranging from high-level meetings or SOM up a meeting with the heads of government. “We begin with a senior officials meeting, forwarded to the ministerial meeting, which will end with a meeting of heads of government or leaders,” he explained.

?The theme of the 60th Commemoration of the KAA, according to Retno is “Strengthening, Straightening, and South-South Cooperation”. As it is known, the Asian-African Conference hold in Bandung in April 1955 ago. In 2004, in the same place also commemorated 50th of the conference that resulted the organization or the Non-Aligned Movement (Humas Setkab/ES)