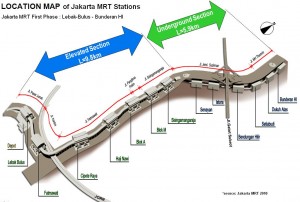 Ministry of State Secretariat affirms its full commitment for the second phase of construction for the Jakarta Mass Rapid Transit (MRT).

The construction of the second phase of the MRT is part of the National Strategic Project to promote mass transportation modes in Greater Jakarta.

This is because the pathway of the second phase of MRT construction passes through the Merdeka Medan Area. Under Presidential Decree Number 25 of 1995 on the Development of the Medan Merdeka Area, the development in the said area must first obtain approval from Ministry of State Secretariat, Anies told reporters in Jakarta on Thursday (1/2).

In order to have the recommendation issued, Eddy went on to explain that the Ministry still needs a thorough study from PT. Jakarta MRT, as well as opinions from relevant ministries/institutions, such as the addendum of the Environmental Impact Assessment (AMDAL) made in 2011, analysis of traffic, as well as security assessment of national vital objects.

However, Eddy surmised that delay in issuing the recommendation regarding the Station and Substation in the Monas area and the end point of the second phase of MRT Project Development should not hamper the groundbreaking of the project.

The total cost to build the second phase of MRT construction is estimated to reach Rp25 trillion. (EN/ES)