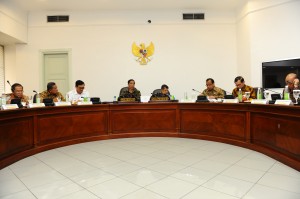 The President also appreciated the move made by OJK (Financial Service Authority) to issue policies that are parts of the de-regulation policies to stimulate the growth of sharia banks.

Nevertheless, we are hoping for breakthroughs to increase contributions of sharia banks to accelerate the development of national economy, the President said in his opening remarks before a Limited Cabinet Meeting at the Presidential Office, Jakarta on Tuesday (5/1).

Therefore, the President expects inputs from OJK, Bank Indonesia and other institutions regarding the plan to establish the Sharia Economic Development Committee.

I ask for more detailed explanation whether the establishment of this Committee can change the ways to develop sharia financial sector in order to be better and to be in a better synergy (with other related institutions), the President added.

President Jokowi further said that he wants to know functions, tasks and membership of this Committee. He also stressed the importance to consider a legal base of establishment of the Committee.