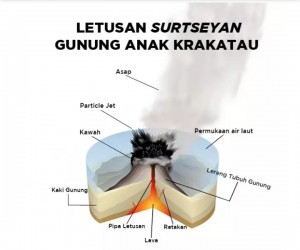 The volcanic ash of the mountain moved east-northeast, while the weather was reported to be cloudy-rainy with the dominant wind direction to the east-northeast.

At 14.18 Western Indonesian Time, the weather was clear and the plume of the eruption did not continue. The eruption was categorized as a Surtseyan eruption as the magma coming out of the crater of Mount Anak Krakatau comes into contact with seawater.

The PVMBG earlier noted a change in the pattern of eruptions at 23:00 Western Indonesian Time on 27 December 2018, of which the eruptions with sharp onset.

The eruptions resulted in the volcano shrink to between 40 million and 70 million cubic meters in size from an initial mass of about 150 million to180 million cubic meters. The reduced volume of Anak Krakataus mountain body is estimated due to the volcanic body creep process accompanied by a high eruption rate from 24 to 27 December 2018.

Visual observation continues to be conducted to obtain more precise calculation results. At this time, the eruption was impulsive, but there is no more plume coming out from the crater of Mount Anak Krakatau after the eruption.

The potential danger from the eruption of Mount Anak Krakatau with its current conditions is the most likely occurrence of a Surtseyan eruption, which takes on the surface of the sea. Although it produces a lot of ash, it cannot trigger a tsunami. The potential danger of throwing incandescent lava material still prevails.

Given the amount of volume remaining not too large, the potential for a tsunami to occur is relatively small unless there is reactivation of faults or fault structure in the Sunda Strait.

The results of observations and analysis of visual and instrumental data until 28 December 2018 showed that the activity level of Mount Anak Krakatau is still Level III (Alert).

Regarding the Level III (Alert) status, the residents are recommended not to approach Mount Anak Krakatau within a radius of 5 km from the crater and suggested to prepare masks to anticipate ash rains. For those in the coastal areas of Banten Province and Lampung Province, they are advised to remain calm and not to trust the rumor circulated that says Mount Anak Krakatau eruption will trigger a tsunami, as well carry out activities as usual by always following the direction of the Regional Disaster Mitigation Agency (BPBD).

For the record, Mount Anak Krakatau, located in the Sunda Strait, is a type A volcano and a young volcano that appears in the caldera after the paroximal eruption in 1883 from the Krakatau Volcanic Complex. Eruption activities after the formation began in 1927,when the volcanic body was still below the sea surface. The body of Anak Krakatoa came to sea level since 1929.