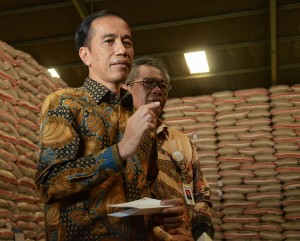 The Government hinted will announce, a possible reduction in the price of fuel oil (BBM) Premiun types, on Monday (5/10) next. This cue is delivered directly by the President Joko Widodo (Jokowi) on the sidelines of the launch of Operation Rice Market, at the Bulog Warehouse, Kelapa Gading, North Jakarta, Friday (2/10) morning.

“There is a possibility lowered. Will reported to me later, on Monday (5/10). Can or cannot be lowered will be announced,” President Jokowi said.

According to the President Jokowi, based on the report of the Minister of Energy and Mineral Resources, the fuel price of premium type would not rise until December. Given the condition of the domestic economy is slowing. However, the president still asked to do a review of existing costs, to examine the possibility of prices decrease.

“It has been submitted that prices would not rise until the end of December. However, I say, if it is possible to see again the existing cost, could be more efficient,” Jokowi said.

Previously, while chairing a limited meeting at the Presidential Office, Jakarta, Thursday (1/10), President Jokowi has asked Pertamina to recalculate the fuel prices in particular types of Premium and Diesel, which is on Wednesday (30/9), has been announced by the Director General of Oil and Gas, Ministry of Energy, I Nyoman Wiratmaja, unchanged until January 2016.

“Try counted again. Although it was announced by the Minister of Energy and Mineral Resources yesterday, but this country is in need. Please be counted again, whether it is still possible which is the feul of premium types be lowered even a little,” President Jokowi said, when giving an introduction to the limited cabinet meeting regarding the licensing pruning, in the President’s office, Jakarta, Thursday (1/10) afternoon.

Recognized by President Jokowi that he knows, and yesterday was a report that the current fuel prices still (-2%) minus two percent of the economic price. “But it might still be lowered,” the President said. (SKT/AGG/ES)