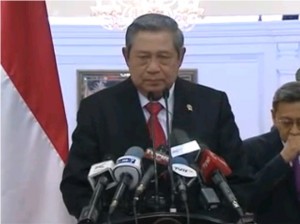 Being the subject of public debate in recent five days after the determination of Law on Local Election draft by Parliament (DPR-RI) on Friday (26/9) morning, President Susilo Bambang Yudhoyono (SBY) finally gives an explanation to public regarding that bill.

I understand the anger from public and media during these five days. Gives me just five minutes to answer, wrote the President through @SBYudhoyono twitter account uploaded before.

The President explains the draft was submitted by government in 2011, after identifying many excesses from the implementation of direct elections. Ministry of Domestic Affairs (Kemendagri) drafted the bill.

In December 2011, SBY signed Presidential Mandate, and assigned the Minister of Domestic Affairs and Minister of Law and Human Rights to discuss the draft with the House (DPR-RI).

Now, who wants election by DPRD / indirect election ? clearly not SBY. I believe the majority of people in Indonesia do not want it either, said SBY in questioning tone.

President SBY explains, during critical moment before the vote, President asks Coordinator Minister for Politics Law and Security, Djoko Suyanto, to contact Pramono Anung Wibowo, Chairperson from PDIP, for Democratic party could join with PDIP in one option that is to vote for direct election with ten improvements.

Eventhough Democratic party has biggest numbers, but the party is willing to join with PDIP in that option for the interest of the people. However, he said that the vote has already begun, said SBY.

Furthermore, SBY said that he did not know the rapid and hot political process at the House, due to technical factor. I was on my trip to Washington DC from New York, wrote SBY on his twitter account.

SBY promises that he would guard the mandate for good politics, with no hidden agenda and bad intention, even deceiving. President also confirms that Democratic party is not get the advantage from indirect election, or election by DPRD. Democratic party only has ten percent from the whole number at the House, he said.

My stands is very clear, I did not choose parliamentary election (election by DPRD), due to bigger possibilities of money politics would play, said President SBY firmly.

President assesses, candidates for the Head of a Region would be chosen by the parliament. These candidates are not necessarily fits by peoples will.  Governor, Regent and Mayor

The choice at the House could be transactional. Candidates for Governors, Regents and Mayors mostly would be determined by the elite parties (chairman of a parties), said SBY.

However, President SBY said that he also not agree with current direct election that needs some fundamental improvements, due to many digression found. (ES)(Ifp)