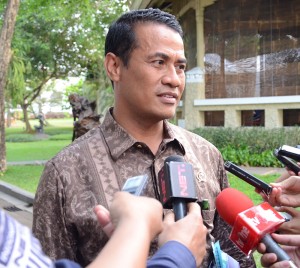 Minister of Agriculture, Amran Sulaiman argued that the Ministry of Agriculture already anticipating the impact of El Nino early since January, to build tertiary irrigation, until now already 1.3 million hectares. Then there are pumps of approximately 21 thousand units.

“As we anticipated are the months from September to October. However, we have done the steps of anticipation as pumping, reservoir, trenches dam, and shallow wells, “said Amran told reporters after attending a limited cabinet meeting which discussed issues regarding the impact of El Nino, in the President’s office, Jakarta, Thursday (6/8) afternoon.

Anticipative measures, Minister of Agriculture said that all already running. Physically, this time for tertiary irrigation of 1.3 million hectares. The pumps has also been handed over to the farmers.

According to Minister of Agriculture, Indonesia endemic drought covers an area of 200 thousand hectares. Last year, about 159 thousand hectares of drought, floods, and pests. This year, because there is anticipation early, then formed a special team, that is Upsus (Special Effort), we managed to save approximately of 100 thousand hectares.

Minister of Agriculture said, Meteorological, Climatology and Geophysics (BMKG) has been explained at the end of October already raining. “So hopefully dry season only until October, he said.