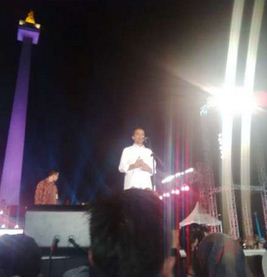 President Joko Widodo (Jokowi) urged again all Indonesian peoples to work hard, in order to advance and upgrade this nation and this country. He urged the peoples through his first speech delivered on the stage of Peoples Party held around the National Monument (Monas), Jakarta, on Monday evening (20/10).

I urge all of you, ladies and gentlemen, whoever you are, no matter whether you are street vendors, public bus drivers, carpenters, public transport drivers, doctors, rickshaw drivers, nurses, mid-wives, teachers, soldiers, policemen, policewomen, and all the volunteers who are present now. I also urge journalists, farmers, fishers, soccer players, athletes, singers, musicians, politicians, students, and all peoples practicing various professions, Jokowi called out.

President Jokowi reminded people that Indonesia is a great country and a great nation. However, right management is really crucial for peoples welfare and prosperity.

For that reason, President Jokowi continued, he and Vice President Muhammad Jusuf Kalla had called on everyone to move together. The Government and all the peoples practicing various professions must work hard. This big-sized country will never turn into a great and strong nation, if we only loaf around, he emphasized.

Appearing on the stage, President Jokowi was accompanied by Miss Indonesia 2014 Elvira Devinamira but without Vice President Jusuf Kalla. Once again, he urged all of this nations elements to work together, to move together, to get united, to cooperate mutually, and to create a prosperous, dignified, and respected Indonesia.

Without working hard, never expect this country to be prosperous, strong, and great, Jokowi asserted and then expressed his gratitude to all the audience who were present at the party. Freedom! Freedom! Freedom!

Before beginning his speech, President Jokowi told that because his arrival in the National Monument was at the same time for early evening (maghrib) prayer, he took time first to perform the maghrib prayer. Have you already prayed? Jokowi asked thousands of the visitors who crowded the National Monument (Monas) Square.

After his speech which was then followed immediately by a common prayer led by the former General Chairman of PBNU (a renowned Islamic mass organization) Hasyim Muzadi and other leading religious figures in Indonesia, President Jokowi presented the top slice of tumpeng (a kind of traditional rice dish) to a female taxi-driver from Petukangan, South Jakarta. The tumpeng was seasoned with various spices coming from the 34 provinces of Indonesia.

The other slices of tumpeng were presented to three mothers from Papua and to the gold-medal winner of the International Physics Olympiad Monica Josephine.