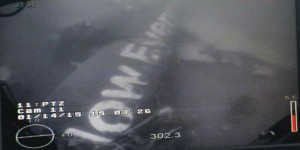 President Joko Widodo (Jokowi) expressed his gratitude for the success of the National Search and Rescue Agency (Basarnas) which have found the fuselage of AirAsia QZ8501, in the waters of Teluk Kumai, Pangkalan Bun, Central Kalimantan, on Wednesday (14/1).

“In the afternoon, I am very happy because recently, I got the news that the fuselage of AirAsia has been found,” Jokowi told to reporters at a press conference held at State House, Jakarta, Wednesday (14/1) evening.

President hopes that the evacuation of the fuselage can be started on Thursday (15/1), so will be able to see what is happening inside of the fuselage, which lost contact since Sunday (28/12) ago.

“The possibility of tomorrow will begin to enter into the fuselage and will be seen in it. Once again I appreciate Basarnas”, Jokowi said.

On that occasion, President Jokowi, expressed appreciation to Basarnas, Indonesia Military (TNI), Indonesian Police (Polri), BPPT and the ministries related volunteers, and the community including fishermen, which have worked hard to find the plane and the crew as well as passengers.

Head of Basarnas, Marshal TNI Bambang Soelistyo, recognizing the role of fishermen since the beginning, helping the process of finding the AirAsia aircraft QZ8501. He mentioned the information given by the fishermen shortly after the plane declared missing.

The AirAsia aircraft QZ 8501 with the flight path from Surabaya to Singapore, lost contact since Sunday (28/12). AirAsia aircraft was carrying 155 passengers consisted of 138 adult passengers, 16 children and 1 infant/toddler, 2 pilots crew, and 4 cabins crew.