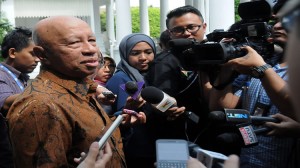 Oil entrepreneur who is also Chair of Medco Group, Arifin Panigoro, met President Joko Widodo (Jokowi) at the Presidential Palace, Jakarta, Monday (6/4) morning. However, the meeting was not to discuss the issue of oil, but related on agriculture.

According to Arifin, President Jokowi gives positive response to the mechanization of agriculture with modern rice field system. Even, according to the plan at the next visit to Papua in early May, the President will review the location being a trial development of modern rice fields in southern Papua.

“I’ve reported all to President, I also will invite to harvest there,” Arifin Panigoro said.

In order to improve the productivity of rice, Arifin has pioneered the development of modern rice fields in Merauke, Papua South. This modern rice fields the entire mechanical concept. 5,000 ha only staffed by 100 people, so one person can be 50 ha. The tools ranging from planting to harvest as same as in the United States.

According to Arifin, the time required to harvest about 100 days, but in a year could not only planted with rice, should be interspersed, for example with soy. In Vietnam and Thailand has implemented a system of modern rice fields. Indonesia could also implement the system, if the land that is used should be flat and wide, it cannot be applied in the terracing system.

Last week already done the harvest and plans to do the quality control, Arifin added. “If this is a success and the scale can reach millions of acres, it will help meet the demand for rice in Java,” Arifin said. (Humas Setkab/ES)