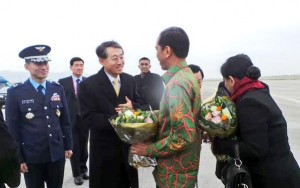 Temperatures in Busan reportedly very cold, ie at 9 degrees Celsius. The sun does not seem to look because covered by thick clouds.

President Jokowi and his entourage headed to the Grand Hotel Haeundae, Busan, because on Wednesday (10/12) evening, he is scheduled to meet with a number of South Korean businessmen.