Arrived in Turkey, President Jokowi Will Follow the Series of G-20 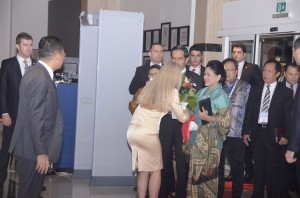 Arrived in Antalya, Turkey, President Jokowi then headed to the IC Santai Hotel, to rest and be greeted by the leadership of the hotel, Sunday (15/11) pm

President Jokowi and First Lady Iriana then headed to IC Santai Hotel, Antalya, Turkey to rest and were welcomed by the Minister of Foreign Affairs Retno LP Marsudi, Minister of  Finance Bambang Brodjonegoro, and the Head of the State Intelligence Agency (BIN) Sutiyoso.

During the visit to Turkey this time, President Jokowi is planned to follow the meeting of G-20 and G-20 Summit. Some Heads of State / Government scheduled to attend the G-20 meeting this time with the theme, “Together for Inclusive and Robust Growth”.

The Agenda of President

Meanwhile, Minister for Foreign Affairs (FM) Retno LP Marsudi in an interview to reporters after welcoming the arrival of President Jokowi said that the agenda of President on Sunday (15/11) is a meeting with the Prime Minister of Canada, Justin Trudeau, who had just won an election in his country ,

“This is the first meeting between President Jokowi and Prime Minister of Canada, Justin Trudeau,” Minister of Foreign Affairs, Retno  said.

Then, a second agenda at the G-20 is working session I. The theme that is taken is inclusive growth, the global economy, growth strategies, employment and investment. While the third program in the G-20 is a working dinner. The issues that will be discussed is the counter terrorism issue.

“That’s the outline, which will be done by the President Jokowi along with the leaders of the G-20, of course, there will be a formally reception and opening and there is a reception in the evening,” said Minister for Foreign Affairs Retno LP Marsudi in a press statement after welcoming the arrival of President Jokowi and First Lady Iriana at IC Santai Hotel, Antalya, Turkey.. (EN/ES)