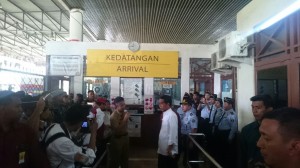 President Jokowi visiting the Checkpoint of Transboundary, in Entikong, West Kalimantan, on Wednesday (21/1)

While inaugurating the Great Mosque of Mujahidin, in Pontianak, Tuesday (20/1), President Jokowi has delivered, will build a dry port, a kind of inland port, in the border area of  Entikong. In addition, the government also widens the road connecting Kuching (Malaysia) with Pontianak (West Kalimantan).

While the Ministry of Public Works (PU) this year will build Wisma Indonesia with three floors in this region.

According to Director of Settlement Development, Ministry of Public Works and Housing, Hadi Sucahyono, the guesthouse (Wisma) will have spaces for Agriculture, Customs, and Transportation.

He added that the construction is divided by zones. However, PPLB Entikong becomes the main zone. “We see that in the Transboundary Checkpoint there are a lot of old buildings, damaged, and the function is impaired due to insufficient breadth, as well as supporting factors,”  Hadi said. (Humas Setkab/WID/ES)