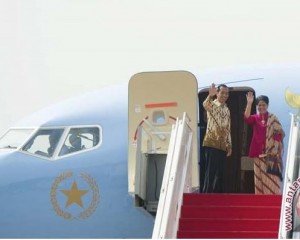 After taking a rest for a while, President Jokowi and his entourage headed to Hotel Kempinski Beijing. In this hotel, Minister of Foreign Affairs Retno LP Marsudi and Minister of Trade Rahmat Gobel had been waiting for him.

On Saturday evening (8/11), President Jokowi held an internal meeting to prepare for a number of events in China. Besides, President Jokowi also needed to make thorough preparations for APEC Summit which was scheduled to begin on Monday (10/11).

Here is President Jokowis schedule during his visit to China.

– Attends the meeting between Chinese and Indonesian business people

– Meets the US President Barrack Obama

– Engages in the dialog between APEC leaders in which President Jokowi is in the same group with the US President, South Korean President, and Singaporean Prime Minister

– Sets off for Myanmar