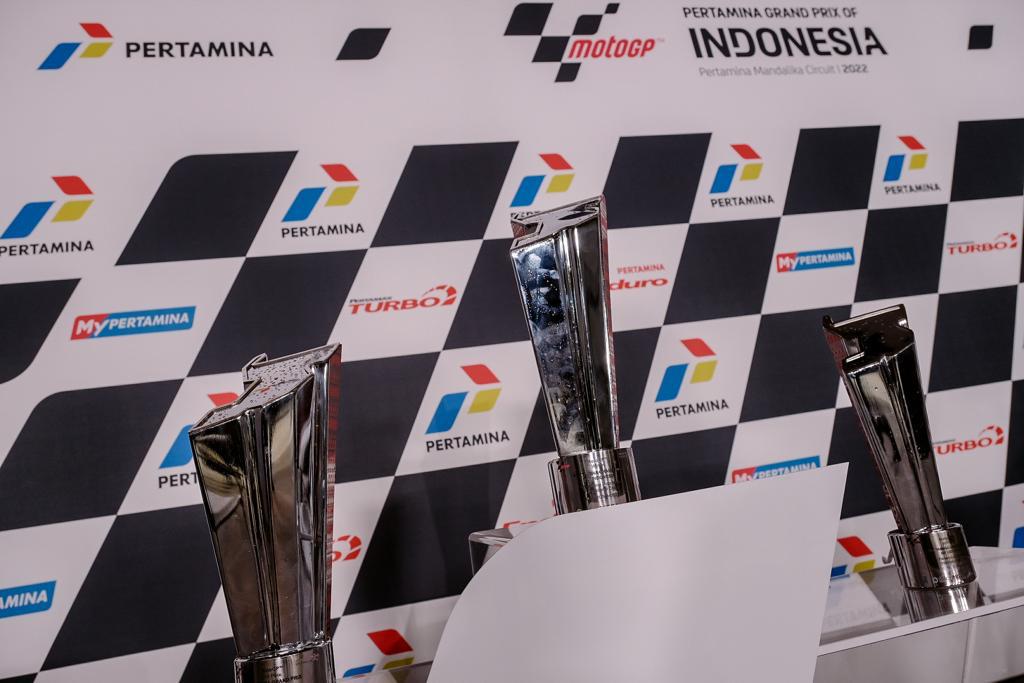 The 2022 Pertamina Grand Prix of Indonesia (MotoGP Mandalika) international motorcycle racing event was completed on March 18-20. The event closed with the handover of the trophy to the winner of the MotoGP class, Miguel Oliveira, from Red Bull KTM Factory Racing. The trophy, which was handed over directly by President Joko “Jokowi” Widodo was designed by an artist from Bali.

The trophy, which was inspired by the shape of torch, was the work of local artists from Tuksedo Studio, Gianyar, Bali province. Tuksedo Studio is trusted by the Indonesia Tourism Development Corporation or ITDC to design and produce the MotoGP Mandalika 2022 trophy. The trophy was also handed over to the riders starting from the Asia Talent Cup (ATC), Moto3, Moto2, and the most prestigious class MotoGP.

Tuksedo Studio explained that the trophy’s design was inspired by a ‘torch’ which symbolizes the burning fire of a hot racing competition. The fire itself also later became a symbol of inspiration for the rise of the Indonesian economy. It also proves that Indonesia is capable of holding continued world class events.

“Especially in the tourism sector, which has been deeply affected by the pandemic. We hope that we can work together so that the fire from this ‘torch’ never goes out,” said Tuksedo Studio in a written statement quoted from Ministry of Tourism and Creative Economy website, Monday (03/21).

On the edge of the trophy there is a local pattern, while at the top it is embellished with a silhouette pattern of the Pertamina Mandalika International Street Circuit.

The light aluminium base material which has the exact strength to support the speed was designed to display a racing event whose winner is determined by the speed of the rider and the performance of the vehicle.

“This is a proof that Indonesia is not only capable of holding a world-class event but also has numerous local artists and workers that have an extraordinary skill to design and create a world-class art work with their own hands,” said Tuksedo Studio.

Minister of Tourism and Creative Economy Sandiaga Salahuddin Uno also expressed appreciation to Tuksedo Studio which had been selected and succeeded in presenting the MotoGP trophy. This is expected to encourage the innovation of other creative actors, especially product designers, to contribute in producing other interesting products.

“We should extend high appreciation for the work of the local artist. This is a form of appreciation and innovation in a product. Hopefully this can motivate and encourage innovation to other artists, especially product designers, to contribute in producing other remarkable products,” said Sandiaga.

The creativity shown by creative economy actors, Sandiaga added, can not only open up job opportunities but can also be an attraction for tourists.

The Mandalika 2022 MotoGP event is not only a world-class sport tourism event but also an opportunity to benefit the public, especially for micro, small and medium enterprises (MSMEs) in an effort to revive the economy and open up job opportunities.

This can be seen from the number of MSME players who have the opportunity to display their products in the world-class event, ranging from culinary, fashion, craft, and others. (PR of Ministry of Tourism and Creative Economy/UN) (EST/MMB)