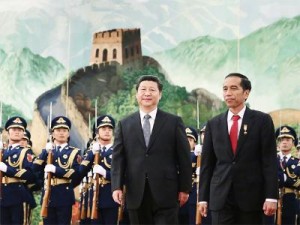 President of the Republic of Indonesia Joko Widodo asked that the 65th anniversary of diplomatic relations between Indonesia and China should be a new milestone in a stronger relationship in the future.

“China is a close friend of Indonesia, Indonesia’s best friend. Tiongkok and Indonesia are comprehensive strategic partners who complement each other, “said the President while giving a press conference with the President of the People’s Republic of China Xi Jinping, after the bilateral meeting between the two Heads of State on Thursday night (26/3) at The Great Hall of the People, Beijing, China.

Alluding to the issue of security of the world, President of Indonesia reiterated that along with the momentum of 70 years of the end of World War 2, Indonesia called for the strengthening of world order, which emphasizes peaceful means in solving the problem, because Indonesia and China has taught a lot from the effects the war. “History teaches that war is never solving the problem,” he said.

President of Indonesia added that the persistence of suffering of the people caused by the use of violence of war, in solving problems such as in Iran, Syria, and Libya, therefore, Indonesia called for all parties to carry out the norms as set out in the Charter of the United Nations in relations between countries.

Related economic issues, according to the President Jokowi, there are changes in the geopolitical and geoekonomi in the 21st century, which should recognize the important role of the new world economic powers such as China, Indonesia, and other countries. Therefore, Indonesia encouraged the international community to support the idea of Asian Infrastructure Investment Bank initiated by China that is an important part of the system of international financial architecture.

“In this regard, Indonesia is ready to facilitate the formation of the main office of the Asian Infrastructure Investment Bank in Indonesia, as I have said at the bilateral meeting with President Xi Jinping on last November,” President Jokowi said.

Meanwhile, in a bilateral context, President Jokowi revealed that Indonesia and China have agreed to cooperate in the eradication of corruption, improving the welfare, and quality of life of the community and the people of both countries.

In addition, Indonesia expects that some of the targets in Indonesia-China relations can be achieved within three (3) of this agenda. The first is the implementation of bilateral currency swap agreement. The second, trade target of 150 billion dollars in 2020. Third, the number of tourists visiting the two countries reached 10 million per year.

Closing the press conference, President Jokowi extended an invitation to the President Xi Jinping to attend 60 Years of the Asian-African Conference and Chinese businessmen to participate in the Asia-Africa Business Summit and East Asia World Economic Forum to be held in Jakarta, on 21 April.