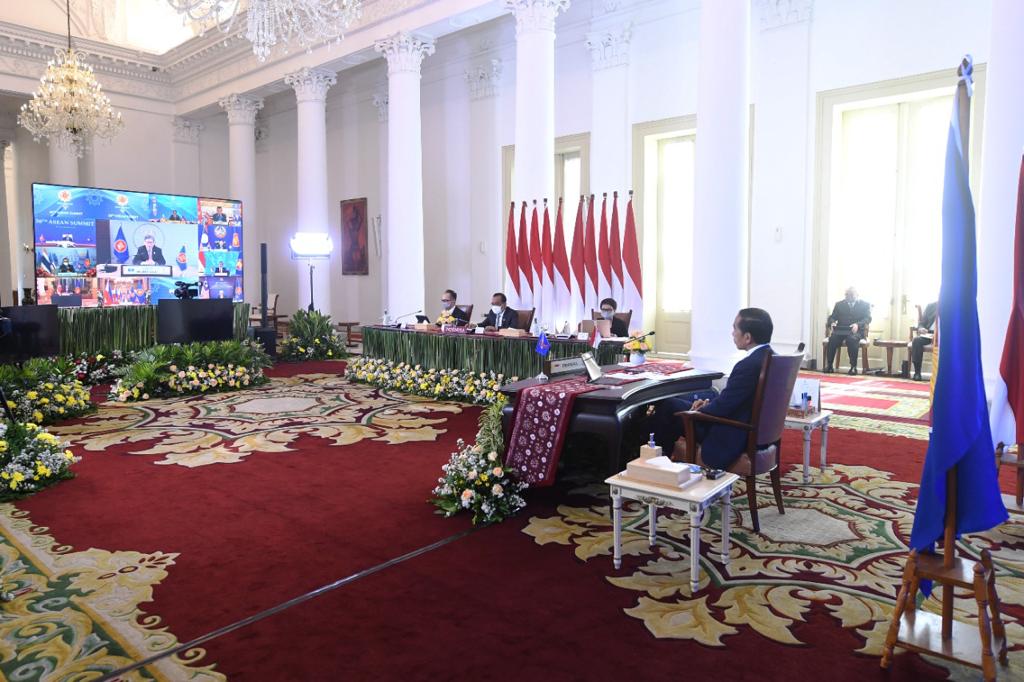 Indonesia wishes ASEAN to become a locomotive of regional stability and prosperity, according to President Joko Widodo.

The President made the statement at the Presidential Palace in Bogor on Tuesday (26/10/2021) during the 39th  ASEAN Summit as held virtually.

According to the President, this year is not an easy year for ASEAN.

“We live in a very dynamic situation in which rivalry between super powers is significant,” President Jokowi said, while expressing hope that ASEAN will not be trapped by mere jargons.

Therefore, a high-level task force that will start to work next year in developing post-2025 ASEAN’s vision also needs to discuss recommendations to strengthen ASEAN, the President added.

The President also underscored that Indonesia hopes to receive the recommendations by the end of next year and to make a decision to be implemented in 2023.

“Therefore, ASEAN will be ready to realize the post-2025 New Vision. Indonesia has delivered a concept paper concerning discussion on ASEAN strengthening. I truly appreciate the support given by ASEAN Leaders for Indonesia’s initiative,” President stated.

Another concern expressed by President Jokowi during the Summit is ASEAN’s  hopes that democracy can be immediately restored in Myanmar through an inclusive process because Myanmar people have rights to live in peace and prosperity.

The President also stated that during the Leaders’ Meeting in Jakarta on last 24 April, he saw optimism in ASEAN as a family to help Myanmar comes out of its political crisis, adding that this is a commitment of a family to help their family members.

The President also said that ASEAN’s decision to invite Myanmar at the non-politic level and to give a chance for Myanmar to settle its internal issue in advance is a tough decision, but it should be done.

“At one side, we have to respect the non-interference principle, but on the other side, we are obliged to uphold other principles stated in ASEAN Charter, such as democracy, good governance, respect for human rights, and constitutional government,” President said, adding that the decision shall give room for ASEAN to implement development plans as promised to the ASEAN community.

However, the President added, ASEAN still has to offer assistance to Myanmar, including humanitarian assistance for the Myanmar people.

The last issue mentioned by President is the implementation of ASEAN Outlook on the Indo-Pacific (AOIP).

“AOIP has very clear principles. It is time for us to pay attention to a concrete cooperation for the implementation of AOIP,” President said.

In this relation, Indonesia, he added, will hold Indo-Pacific infrastructure cooperation forum in 2023 and the forum will be held by the time Indonesia receives the mandate to be the Chair of ASEAN.

“I hope we continue to promote cooperation in the framework of AOIP,” the President remarked. (Bureau of Press, Media, and Information Affairs of Presidential Secretariat/UN) (AW/EP).