ASEAN-India Should Be One of Worlds Economic Generators: President Jokowi 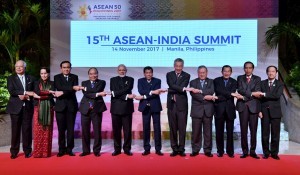 The Association of Southeast Asian Nations (ASEAN) and India have huge potentials, namely a joint market reaching 2 billion people and a total GPD of USD4.5 billion. Therefore, ASEAN-India should become one of the worlds economic generators.

The statement was made by President Joko Jokowi Widodo during the 15th ASEAN-India Summit, which was also attended by Indian Prime Minister Narendra Modi.

However, trade of balance and investment (between India and ASEAN) are still from being optimal, the President said.

On that occasion, President Jokowi also expressed Indonesias appreciation for the progress of ASEAN-India partnership cooperation for 25 years. The President added that this years Summit serves as a momentum to push for strengthening of cooperation before the peak of ASEAN-India Commemorative Summit next year.

The success of RCEP sends a strong message that economic integration can bring about benefits for all, the President said.

President Jokowi further said that as of now the world is still facing uncertainties.

Therefore, ASEAN and India need to strengthen cooperation on the strengthening of regional security architecture and maritime cooperation, including through the IORA in the Indian Ocean, as well as the finalization of the ASEAN-India Maritime Transport Agreement, the President said. (SM/ES/EN) (EP/YM/Naster)