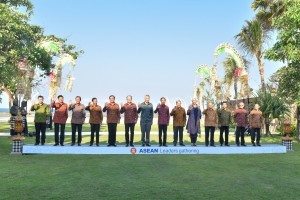 The ASEAN Leaders takes a group photo before the gathering events at the Sofitel Hotel, Nusa Dua, Bali, Thursday (11/10). (Photo By: Anggun/Public Relations).

Heads of State/Government of ASEAN countries have agreed on the importance of reducing disparities and development gaps in each member country and between ASEAN countries.

This step is important to ensure that no one is left behind, President Joko Jokowi Widodo said, who was accompanied by Singaporean Prime Minister Lee Hsien Loong in his statement to reporters after the ASEAN Leaders gathering at the Sofitel Hotel, Nusa Dua, Bali, Thursday (11/10).

For that reason, President Jokowi also emphasized the importance of synergies between regional organizations and the United Nations, the importance of achieving the SDGs (Sustainable Development Goals) as well as Indonesia’s priorities while being a Non-Permanent Member of the UN Security Council.

Previously, the President said that although various challenges are faced by the global economy, ASEAN economic growth is still above the world’s average growth and the achievements of SDGs in ASEAN are also quite good. Extreme poverty rate in ASEAN has declined by around 68 percent in 15 years, he said.

President Jokowi also maintained that the achievement of SDGs cannot be fulfilled independently by one country without cooperating with other countries. It requires global leadership and shared responsibilities, the President said.

On the occasion, according to President Jokowi, ASEAN leaders offered their sympathy and condolences to the victims and families of victims of the earthquake and tsunami that hit Central Sulawesi province and West Nusa Tenggara province. On behalf of Indonesian Government, the President applauded the solidarity shown by the world and by ASEAN to Indonesia.

We will continue the hard work with optimism to overcome the emergency response situation and continue it to rehabilitation and reconstruction phase, President Jokowi said.