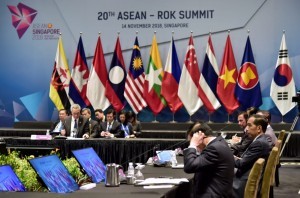 The President also considered that President Moons determination serves as a beacon of hope amidst many uncertainties in the world today.

Amidst many uncertainties, we still have some hopes for a safe and stable Korean Peninsula. This will not materialize if there is no strong determination shown by President Moon to seek peace, the President said during the ASEAN-South Korea Summit at the Suntec Convention Center, Singapore, Wednesday (11/14).

The President added that Indonesia maintained bilateral relations with both South Korea and North Korea for more than 50 years, and fully supports hard work and peace efforts made on the Peninsula.

Indonesia fully supports the peace process and has consistently delivered our support, among others, during my meeting with the South Korean PM and the North Korean Special Envoy ahead of the opening of the Asian Games on August 18, said the President.

On that occasion, President Jokowi also invited North Korean leader Kim Jong-un to attend the 30th Anniversary of ASEAN and South Korea cooperation in 2019, should all positive developments continue to occur.

Through this meeting, we hope North Koreas commitment to take steps towards a nuclear-free Korean Peninsula will be even stronger. In the future, Gods willing, we will see ASEAN and the two Koreas as important pillars of the architecture of peace and partnership in the region for the sake of stability, security and shared prosperity, the President concluded. (Bureau of Press, Media, &Information of Presidential Secretariat/ES)