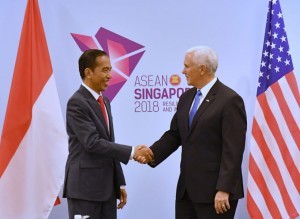 The two leaders discussed cooperation between the two countries in three sectors, including in building a pluralistic society, in economic field, and in maintaining peace and security in the region.

Speaking to reporters after the meeting, Indonesian Minister of Foreign Affairs Retno Marsudi said that two leaders agreed on the importance for cooperation in building a pluralistic society.  This message was conveyed by the President on several different occasions, she said.

Regarding economic cooperation, Retno said that the President maintained that in trade sector, Indonesia and the US do not compete with each other and could complement each other instead. Therefore, she said, the President is convinced trade relations between the two countries will be mutually beneficial.

In this context, the President expressed hope that the US can continue to provide Generalized System of Preference facilities for Indonesia because this facility is very beneficial not only for Indonesia but also for the US. The President also emphasized that if we use the zero sum approach, it will worsen the situation, Retno continued.

As for cooperation in maintaining peace and security in the region, including collaboration for the development of the Indo Pacific, the Minister said that President Jokowi during the talk also delivered several principles and said that Indonesia would deliver the Indo Pacific concept at the East Asia (EAS) Summit.

We have also talked with the US, and from the existing concepts, I think we can synergize our cooperation, Retno said.

In addition to discussing cooperation in those three fields, Retno said that President Jokowi also expressed hope that the US would provide support to the ASEAN Humanitarian Assistance (AHA) Center – a center for coordination and information on disaster management in the ASEAN region -, particularly related to the Rakhine State issue.