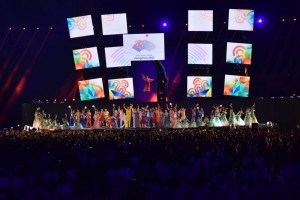 After the marching band parade, the event continued with the parade of flags representing countries participating in the Games followed by parade of nations. The rain did not hamper the athletes to joyfully march, waving hands to the spectators.

The three mascots of the Asian Games, Kaka, Bhin Bhin, and Atung also joined the parade.

During the event, the Asian Games volunteers, who have made significant contributions to the success of the quadrennial sports event, mingled with the athletes and the officials. 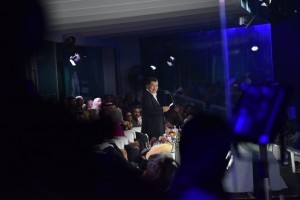 On the occasion, President Joko Jokowi Widodo delivered his remarks through video streaming from the quake-hit Lombok. The President watched the ceremony with the locals, some of them are survivors of the earthquake hit the island last month. “I apologize for not being able to attend the closing ceremony,” President Jokowi said.

The [Asian Games] ended today, but the Energy of Asia will not go away. Thank you all nations of Asia. This is the true energy of Asia, the one which unites us to bring goodness to the world, the President added.

Meanwhile, President of the Olympic Council of Asia (OCA) Sheikh Ahmad Al Fahad Al Sabah also delivered his remarks, congratulating Indonesia for the success of the sports event.  “Thank you Indonesia, we love you. Thank you Jakarta. Thank you Palembang, ” Sheikh Ahmad said.

The event continued with raising the flag of the Peoples Republic of China and singing of its anthem, followed by Chinese cultural performances and remarks from Alibaba Group founder and the 2022 Asian Games steering committee, Jack Ma.  (FID/AGG/ES) (RI/EP/Naster)