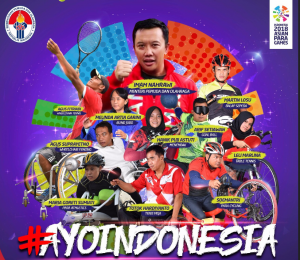 Following the success of the 2018 Asian Games, Indonesia is set to hold another multi sports event for athletes with disabilities called the 2018 Asian Para Games to be held in Jakarta on 6 to 13 October 2018.

In a joint press release of Ministry of Youth and Sports and Ministry of Communication and Informatics on Friday (5/10), the 2018 Asian Para Games will be the third after the first one in Guangzhou, China in 2010 and the second one in Incheon, South Korea in 2014.

In the 2010 Asian Para Games in Guangzhou, Indonesia was placed on rank 14th out of 30 and bagged a gold medal, 5 silver, and 5 bronze medals. Indonesias achievement rose on the 2014 Games in Incheon, bagging a total of 38 medals and being ranked 9th out of 32 participating countries in the medal tally.

Some of these sports are adjusted for people with disabilities. The Sitting Volleyball for example, as the name suggests, is a volleyball match but is done by sitting, the press release stated, adding that wheelchair basketball is also a basketball game with some rules adjustments because the athletes use a wheelchair.

However, there are also sports that are only specifically played by people with disabilities such as boccia and goal ball.

Boccia is a sport played by people with limited motor skills by throwing a red ball against the blue one to get close to the white target ball. In the meantime, Goalball is played by people with visual impairments and played by throwing the ball into the goal. When the ball is thrown, the opposing team will act as a goalkeeper and the players will take turns. A bell is attached inside the thrown ball because they cannot see the ball.

A total of 15 of 18 sports in the 2018 Asian Para Games will also be contested at the upcoming 2020 Tokyo Paralympics, which will not include Lawn ball, bowling and chess.

Indonesia is targeting to grab 16 medals and placed on 8th rank at the 2018 Asian Para Games, the press release concluded. (EN/ES) (GWH/MMB/Naster)