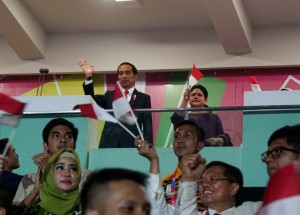 President Joko Jokowi Widodo said expressed his pride to welcome all of the 2018 Asian Para Games participants from 43 countries.

The Games will be held in Jakarta and Bogor from October 6 until October 13.

On the occasion, President went down to the stage to accept a message from a disabled athlete Bulan Karunia Rudianti. President Jokowi then removed his jacket and wore archery attire.

Afterwards, President Jokowi, Bulan, and Abdul Hamid (archery athletes) arrowed the letter D, I, dan S from the word disability to become ABILITY as a symbol for miracle greatness.

For the record, as many as 3,000 athletes from 43 countries in Asia take part in the 2018 Asian Para Games. The athletes will compete in 18 sport branches.