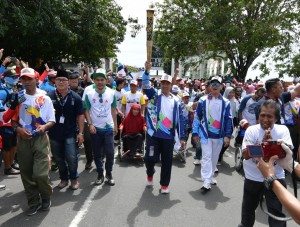 After being kept at the Ternate Sultanate, North Maluku, Saturday (8/9), the 2018 Asian Para Games Torch Relay flame was ignited for the first time and also was relayed in the city of Ternate, North Maluku.

The Minister of Youth and Sports Imam Nahrawi was the first person to ignite the torch, then handled to the Chairman of Indonesian Asian Para Games 2018 Organizing Committee (INAPGOC) Raja Sapta Oktohari and followed by the disabled tennis athletes from Ternate Rizal Assor.

The Minister and his entourage went on to the last location of the torch relay by riding bicycles with hundreds of cyclists. Ternates people were so enthusiast; they cheered along the way and supported this torch relay.

National Sports Day (Haornas) is a great momentum to start this relay after the flames were brought from Grobogan, he said.

Ternate was not chosen carelessly, he implied. Ternate is the city of sultan, culture development and tradition are majestic here.

This relay is ignited as one nation in diversity and also to respect one another including people with disabilities, it begins here in Ternate to appreciate and raise their dignity through the 2018 Asian Para Games, he added.

The 3rd Asian Para Games is the first Asia disabled sporting event to be hosted in Indonesia.

This should be the emergence of our nations sporting event because sports unites cultural differences. The success of Asian Games, Haornas,  and we pray for the success of the Asian Para Games, we are one, he added.

INAPGOC Chairman Raja Sapta Oktohari felt proud and grateful to the regional government and Ternates People that are so cooperative and enthusiast in supporting the 2018 Asian Para Games.

The people of Ternate are enthusiast in welcoming this torch relay, we pray that if Asian Games was a success we hope that Asian Para Games will have the same outcome in successfully hosting, administrating and achieving medals, let’s keep on going, and continue to burst the spirit of caring about disability, Okto concluded.