Asked by Little Reporter, President Jokowi: Should Not Indicate Sad, Must Optimistic 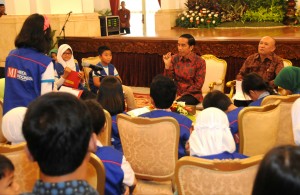 Exactly one year to lead this country, President Joko Widodo (Jokowi), accompanied by Chief of Staff of President Teten Masduki, at the State Palace, Jakarta, Tuesday (20/10) morning, received a special guest, the 50 children who had been elected in the selection little reporter Kids Media Indonesia and participated in journalism training for elementary school students.

The children submitted diverse tickle question. One reporter, Kalika of SDN Tangerang asked whether the president is his goal, and how impressions become president. Joko Widodo said that being president is not his goal. Then he also recounted his experience to be president so far.

The other tickle Question came from Vayana, 5th grade student of Tunas Global Primary School, asking the RI-1 about what educational background, and regard himself as a businessperson with politicians.

“My educational background and background as an entrepreneur, does not apply with regard to my political career. However, the values of honesty, hard work and perseverance, which I gained during this life supporting and shaping my character,” Jokowi said.

President Jokowi also convey the things that are needed if it is to become a leader. Other than these properties, also must have a strong intention, dare to take risks and dare to take the challenge, firmly.

“And it does not apply only to become president, other professions also have to possess it,” he said.

On the sidelines of debriefing President Jokowi asks one of the children to read the text of Pancasila, and singing to break the ice.

The President also advised the children to study well, respect each other and respect, mutual help, invite his friends to protect the environment, do not litter, and also to maintain health.

One child named Omar asks the question of whether the president never stressed during his tenure. President Jokowi immediately answers that question with a bit of a joke, if the president is prohibited to stress.

“With the activities and the issues of the country those are so many, there are 250 million citizens to be resolved, it is necessary to arrange a good time and I need a protocol to help me. If upset or sad not to be shown despite my occasional expressive, because if for example I show my sadness, then later people will be sad all. So I must be optimistic,” President Jokowi said, then greeted with laughter by these children.

According to the plan, the results of interviews by little journalists will be used as a book and distributed to all elementary school library in Indonesia, with the hope the children can get inspiration and can be a figure of the future leaders. (FID/RAH/ES)/Sy.