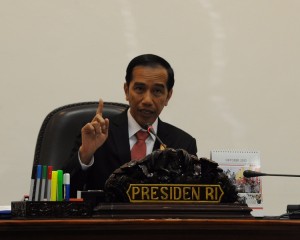 President Joko Widodo (Jokowi) asked Pertamina to recalculate the price of fuel oil (BBM), which on Wednesday (30/9), has been announced by the Director General of Oil and Gas, Ministry of Energy and Mineral Resources, I Nyoman Wiratmaja, unchanged until January 2016.

“Try counted again. Although, it was announced yesterday by the Minister of Energy and Mineral Resources, but this country needed. Please be counted again, is it still possible premium was lowered, although a little bit,” said President Jokowi when giving an introduction to the limited cabinet meeting regarding the licensing pruning, in the President’s office, Jakarta, Thursday (1/10) afternoon.

President Jokowi admitted that he knew, and had received a report yesterday that the current fuel prices still (-2%) minus two percent of the economic price. “But it might still be lowered,” the President said.

“We decided the price of fuel remains. The consideration is to maintain stability and facilitate economic planning, “said Wiratmaja while mentioning, fuel price will be reviewed every three months or longer to be reviewed on January 1, 2016.

Currently, the premium price is Rp 7,300 and Rp 6,900 Solar. While taking into account the average world oil price, and the value of the rupiah against the dollar, and the index of oil price Singapore (MOPS) in the last six months, as of October 1, the average price Premiun should be Rp 8,300 / liter and diesel prices Rp 6,750 / liter