At the UN Headquarters, Rachmat Witoelar Emphasizes the Importance of Carbon Pricing 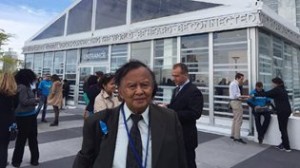 At the UN Headquarters, Rachmat Witoelar Emphasizes the Importance of Carbon Pricing

Rachmat Witoelar in the second meeting between businessmen and government on climate change at UN Headquarters in New York, USA, on Saturday (26/9), emphasizes that the carbon pricing should be more comprehensive as the internalization of external costs.

“It is righteously that the polluter pays principle is based on the capacity and national conditions. This mechanism must be seen as an attempt to safeguard the sustainable development,” Rachmat Witoelar said.

According to Rachmat Witoelar, This is in line with the Medium Term Development Plan 2015-2019 that emphasizes improving people’s welfare and poverty alleviation.

Carbon pricing is an effort to address climate change. About 40 countries and more than 20 cities / provinces, have used or are being in preparation using carbon pricing mechanisms, such as emissions trading systems and carbon taxes.

Meanwhile the UN Secretary General Ban Ki-moon wanted and called on countries to submit as soon as possible, their action plan, which will form the basis of the new climate change agreement that is universal.

“The Secretary-General really wants that all countries to submit their climate action plans,” UN Assistant Secretary General for Climate Change, Janos Pasztor said in the release of the UN Information Center (UNIC) in Jakarta, Saturday (26/9).

According to Pasztor, up to now, there have been 62 of the 194 parties to the UN Framework Convention on Climate Change (UNFCCC) that has awarded the National Determination of Contributions (INDC).

He also argued that the submission INDC from various parties has been outstanding, as is the fact that the plan is based on what was prepared by countries to respond the climate change.

Ministry of Environment and Forests opened the opportunity for communities, non-governmental organizations, and community organizations to provide input to draft the document.

The document is planned to be the attitude of Indonesia in the High-Level Conference on Climate Change (Conference of Parties) to the UNFCCC-21 in Paris, France, on November 30 to December 11, 2015. (Humas UKP-PPI/ES)/Sy.