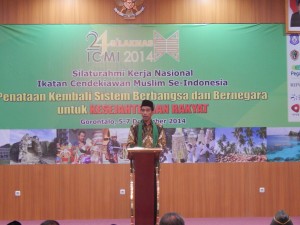 In front of the audience who crowded the grand hall of Gorontalo State University, President Jokowi welcomed positively the theme conveyed in Silaknas ICMI 2014, namely The Nationhood and Statehood Systems Re-management for Peoples Welfare. In particular, in Silaknas ICMI 2011, ICMI already declared Moral Advancement which is actually similar to Mental Revolution promoted by President Jokowi.

On that occasion, President Jokowi encouraged strongly the development of large-scale harbors, each of which covers an area of more than 500 hectares, in the hope that such harbors will keep up with the continual increase in carrying capacity of sea-going vessels until the next 50 years.

Concerning our harbors, the average of our harbors areas presently ranges between only 6 hectares, 8 hectares, and 25 hectares. It shouldnt be like that if we must prepare for the next 100 years, President Jokowi said and then mentioned that the Government will prioritize the development of harbors with the areas of more than 500 hectares each.

President Jokowi instructed the regional governments to prepare the areas of at least 500 hectares each. If they can prepare areas of 2000 hectares, it will be better and we will prioritize the development of such areas. Such development must be integrated with the power plants and the others, he asserted.

The Government, President Jokowi said, will construct 24 harbors with the budget resulting from the saving of subsidies on fuel oils, increase in tax revenues, and other efficiencies.

President Jokowi considered that its difficult to expand harbors like Tanjung Priok because its immediate surroundings are already fully occupied with residents houses. Meanwhile, in Pangkalan Bun, Central Kalimantan, President Jokowi was confused because the harbors areas there are so varied, with the one having an area of only 8 hectares while the other 50 hectares. It shouldnt be like that if our vision is to reach the next 50 or 100 years, President Jokowi stated.

President Jokowi asserted that everyone must have the same vision to develop all sectors, including developing harbors. He reminded everyone that the line of development must flow smoothly from the central government to provincial, regency, and municipal governments.

If you are instructed to go north but some of you go east or west instead, then we will hardly succeed in making any advancement. Our vision must be the same, not only for the next 5 or 10 years but for the next 100 years, President Jokowi reiterated.

In maritime sectors, President Jokowi exposed cases related to illegal fishing. He even recounted his efforts and his instructions to sink ships which are positively found to be used to steal Indonesias fish.

I have instructed the authorities to sink them but the authorities didnt do it, whereas the instructions really came from me, their supreme commander. Finally, the authorities really sank the ships last afternoon. There were about three ships which were sunk, President Jokowi said, greeted with the audiences laughter.

President Jokowi urged all members of ICMI and all the audience of Silaknas ICMI 2014 to contribute their thoughts resulting from this Silaknas event because the moral advancement or the mental revolution must be carried out for peoples welfare.