Attending Tawur Agung, President Jokowi Invite the People to Live With the Spirit of Diversity 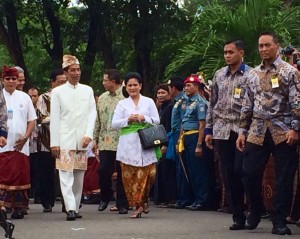 In his speech, President Jokowi said “As part of commemoration of Nyepi, Tawur Kesanga ceremony can give inspiration and new spirit for Hindus in building the community life, national and state life,”

He said, Nyepi Day has significance to reflect on the nature and contemplate the meaning of life in this mortal realm. Nyepi Day, he added, is a means of reflection and self-evaluation to cleanse the soul of all forms of behavior that is not good, the mind that does not clear, words inappropriate.

Therefore, President Jokowi invite all Hindus in the country to make that Nyepi Day as a means to create peace, tranquility, and harmony.

On that occasion, the President Jokowi invited Hindu people across the country in order to continue to live the noble values of Hinduism. “Put forward the spirit of tolerance and diversity, spirit of togetherness, spirit of mutual cooperation, spirit of unity in the diversity,” message of president.

To the big families of Indonesia Hindu Dharma Association, the President expressed his gratitude for the role and dedication given over the years. “Continue the best dedication all brothers to be offered for the advancement of the nation country,”