Attorney General: Only President Can Grant Clemency of Death Penalty for the Drug Offenses 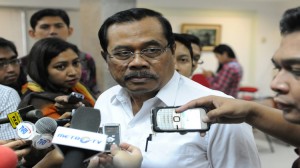 Attorney General Prasetyo admitted that a number of death row inmates of narcotics and drugs (Narkoba) have filed a complaint to the State Administrative Court (PTUN) against the plan executions by government. However, he cautioned that only the President could grant clemency to convicted drug traffickers, nothing else.

“What is certain, once again I say that clemency is the prerogative of the President, the only head of state who has the right, it cannot be contested,” Attorney General said to reporters after attending a limited cabinet meeting at the State Palace, Jakarta, Tuesday (10/2).

The question whether the filing of the complaint to PTUN, as has been done two Australian drug death row, Andrew Chan and Sukumaran could delay the execution or not, Attorney General Prasetyo handed it to the President Jokowi.

“As I said earlier, the prerogative solely owned by president, PTUN could not postpone the decision,” Prasetyo said.

President Jokowi has expressed repeatedly that he will not give clemency to death row of narcotics and drugs (Narkoba) that have gained permanent decision of the court, because of the adverse effects of their behavior.

Attorney General, HM. Prasetyo recalled that only the President has the prerogative. “The prerogative solely owned by President. Clemency, amnesty, abolition, rehabilitation, all governed by the Constitution (UUD), only President who has the authority,” he said.

However, the Attorney General cannot be sure, when the convicted drug executions will be carried out. “I would say the exact time later,” he said.

When asked whether there was a decision on clemency to death row inmate of narcotics and drugs Silvester, who was arrested again for controlling narcotics from behind the prison, Attorney General Prasetyo simply said, “may be on the way”. (Humas Setkab/ES)