Australia Protest Against Death Execution of Drug Convicted, President: This is Our Sovereignty 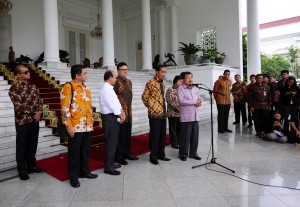 On the occasion of delivering a press statement after meeting with the mayors throughout Indonesia, at the Presidential Palace in Bogor, West Java, on Friday (20/2), President Joko Widodo (Jokowi) also respond on the issue that the complaint from the Australian government has made Indonesian government to postpone the death execution against the drugs convicts, including two Australians, namely Andrew Chan and Myuran Sukumaran.

“No, this is our law sovereignty. It’s just a technical matter, the food issue, just ask to the Attorney General”, President Jokowi said.

As related to a statement from the Australian Prime Minister Tony Abbott regarding social assistance, at the time of the tsunami in Aceh to the Indonesian government that is expected to be considered to delay the execution for Australian citizens, President Jokowi explained that Vice President Jusuf Kalla has confirmed it, and it turns out the intention is not such as it

According to Vice President Jusuf Kalla, Australian Foreign Minister Julie Bishop explained, while deplored the misunderstanding. Quoting explanation Bishop, Vice President Jusuf Kalla said that Prime Minister Tony Abbott wants to say, that in the past, the relationship between Indonesia and Australia is good, including at the time of the tsunami, the participation of Australia is certainly good.

“This means that Australia wants to continue the cooperation, good cooperation in economic, defense, police, and both countries want to fight drugs. He understands that the Indonesian law should go like that,” Vice President said.

The Vice President also expressed that the executions of the drugs convict, is not decided by the President. “Do not forget, the tribunal which is independent, objective, because this damaging our nation. So this is objectivity of the court not the President, so dont ask the government,” Kalla said.

As reported previously, after an execution to 6 (six) convicts drugs in January, Attorney General of the Republic of Indonesia is planning to carry out death executions again to the convict drugs, two of them were Australians, Andrew Chan and Myuran Sukumaran.

Australia’s government strongly reacted to the execution of the convict drugs plan as including two Ausralian citizens. Various efforts approach has been made by the government of Kangaroo country, although President Jokowi on various occasions has asserted, that he would not grant clemency to death row inmates drugs because of so many casualties caused by   their actions, the drug smugglers.  (Humas Setkab/ES)