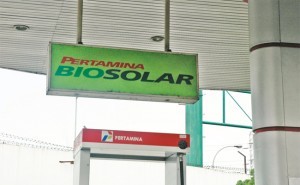 The use of B20 fuel – a mixture of 20% biodiesel and 80% petroleum diesel – has had a positive impact on saving the countrys foreign exchange since it was implemented in September 2018.

In the past four months, massive policies for various sectors are able to save US$937.84 million, Oil and Gas Director General of Ministry of Energy and Mineral Resources (ESDM) Djoko Siswanto said at the Ministrys Office, Jakarta, Monday (14/1).

According to Djoko, the implementation of B20 is proof of the Governments commitment to national energy security issues, which are also a serious problem going forward, particularly to help reduce the dominance of fossil fuel use.

In addition to the B20 policy, the conversion of fuel to Liquified Petroleum Gas (LPG) was also applied by the Government as an effort to diversify energy. In 2018, a total of 6.55 million Metric Ton (MT) of subsidized LPG and 0.99 million MT of non-subsidized LPG were distributed to 530 public service obligation (PSO) of bulk filling stations (SPBE) and 103 non-PSO SPBE.

The savings obtained from this conversion policy for a year amounting to Rp29.31 trillion (unaudited), said Djoko.

When it comes to subsidized fuel, the realization rate is almost close to the total budget allocated in the 2018 State Budget, which is 16.23 million KL. This is due to the obligation for business entities to distribute premium in Java, Madura, and Bali under Presidential Regulation Number 43 of 2018 on the Provision, Distribution, and Retail Price of Fuel, signed on 23 March 2018.

As for non-subsidized fuel, the Government will evaluate the decrease in the price of this type of fuel once a month.

We are currently evaluating, Pertamina has just decreased the price yesterday, said Djoko, adding that the period was considered appropriate in order to avoid confusion in the public. (Public Relations of Ministry of Energy and Mineral Resources/ES)