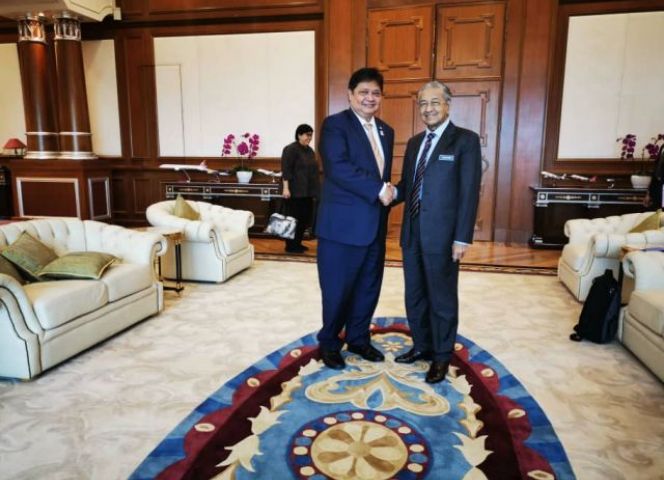 Indonesia has successfully implemented the Biodiesel Program 20% (B20) and aims to implement the B30 mandatory program in early 2020, Coordinating Minister for Economic Affairs Airlangga Hartarto has said.

“The program has raised the price of palm oil to more than US$ 600 per ton,” Airlangga said during his courtesy call to Prime Minister of Malaysia Mahathir bin Mohamad in Putra Jaya, Kuala Lumpur, Tuesday (19/11).

Airlangga also applauded Malaysia’s commitment to implement the B20 mandatory program in 2020 in a bid to raise the global price of palm oil and improve welfare of smallholder farmers.

He added that there are four countries that will join the Council of Palm Oil Producing Countries (CPOPC), namely Papua New Guinea, Honduras, Ghana and Colombia. The addition of new members, he added, is expected to improve the CPOPC’s global influence.

In the meantime, Prime Minister Mahathir expressed his support for the implementation of the B30 mandatory program in Indonesia, adding that Malaysia seeks to follow Indonesia’s policy on the matter.

The Malaysian PM also expressed his support for the sustainability of palm oil to improve synergy of the program between Indonesia and Malaysia and increase the competitiveness of the farmers.

PM Mahathir also said that he would limit the addition of ​​palm oil area in Malaysia and would focus on increasing the productivity of farmers.

In an effort to increase productivity, Mahathir said that Malaysian Government encourages the intensification of R&D activities, particularly in developing downstream oil palm products so that the added value of the products could increase.

The Malaysian Prime Minister further said that Indonesia and Malaysia have agreed to increase cooperation on developing strategies to improve palm oil price.

Malaysia and Indonesia, he added, also need to continue implementing concrete measures to deal with negative campaigns against palm oil, including litigation efforts at the WTO forum.

“To counter the negative campaign against palm oil, a commitment to allocate adequate resources is needed,” Mahathir said. (PR of Coordinating Ministry for the Economy/ES).