Baasyir to be Released Based on Humanitarian Grounds: President Jokowi 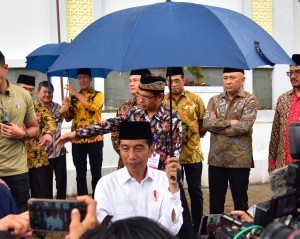 President Joko Jokowi Widodo has decided to release an 81-year-old convicted terrorist Abu Bakar Baasyir from Gunung Sindur Prison in Bogor, West Java, despite him having several years left to serve in prison.

The decision is informed by the Presidents lawyer Yusril Ihza Mahendra when visiting Gunung Sindur Prison on Friday (18/1).

On the different occasion, President Jokowi who has finished inspecting the construction process of low-cost apartment in Darul Arqam Muhammadiyah Islamic Boarding School, Ngamplangsari, Garut, West Java, told the reporters that the decision to release Abu Bakar Baasyir is purely made based on humanitarian reasons.

He is really old, the basis for this consideration are humanitarian reasons, old age, and deteriorating health, the President added.

According to President Jokowi, the decision is made after receiving much tought and consideration from the Indonesian Police Chief, Coordinating Minister for Political, Legal, and Security Affairs, experts, and Prof. Yusril Ihza Mahendra since the beginning of last year.

For the record, Abu Bakar Baasyir has been in prison for nine years after being sentenced to 15 years in 2011 since the court found him guilty of planning and funding a military training camp for terrorists/armed groups in Jantho Mountains, Aceh in 2010. (EN/DNS/ES)