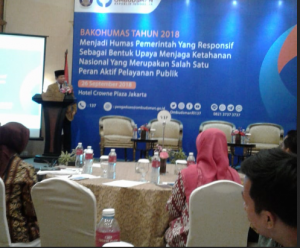 Member of the Presidential Advisory Board (Wantimpres) Agum Gumelar called on members of the Government Public Relations allied under the Public Relations Coordinating Board (Bakohumas) to be excellent in communication.

Coordination and communication among Bakohumas members are needed to really understand the current situation and condition, Agum said in his keynote speech at the Bakohumas Ombudsman Thematic Forum, at the Crown Plaza Hotel, South Jakarta, Wednesday (9/26).

For the record, the forum adopts the theme: Becoming Responsive Government Public Relations in an Effort to Preserve National Stability.

Agum, who is also Chairman of the Veteran Association (Pepabri), also noted that if national stability is threatened, national development would be affected. Therefore, communication among Government Public Relation members is important, he said.

Agum also expressed belief that the majority of Indonesians wants the nation to unite in the Unitary State of the Republic of Indonesia (NKRI) although he reminded that some crafty people want to disrupt Indonesias unity so that national development cannot continue.

Therefore, Bakohumas needs to give the right inputs to the Government about issues developing in our society and to find solutions with an elegant and ethical means, Agum said.

Related to reforms, Agum explained that Indonesian people have to leave behind qualities that are not compatible with reforms demands such arrogance, hypocrisy as well as corruption, collusion, and nepotism (KKN).