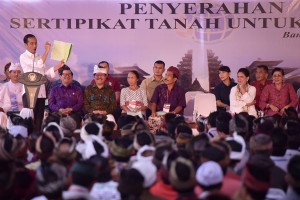 In his remarks, the President stated that all parcels of land across the country will have been certified by 2025 and Bali will be the first province where all landowners will hold land certificates by 2019.

President Jokowi also told the audience that he always received complaints from the people during his working visits to villages, regencies, regions regarding land disputes and agrarian matters.

Thus, land certificate as legal proof of property ownership is really important to prevent any land disputes and conflicts, he added.

Once you have this certificate, people cannot easily claim to own your property because in the certificate the name of the owner, location, and area of land are written down. If you want to settle the dispute at the court, you will win the case because you own this (land certificates), he said.

Therefore, President Jokowi reminded those who already have the certificate to put it in a plastic cover and make a photocopy of it so that if the certificate is lost, the copy of it will make reissuance process at the National Land Agency (BPN) easier.

President Jokowi also said he allowed certificate holders to use land certificates as a collateral for bank loan as long as they do not sell the certificate.

The Head of State also reminded the people that once they receive the loan, they are advised to use it as capital to start a business and investment, and not to spend it on things which are not necessary instead.

People often spend the money to buy a car. However, once you cannot pay the monthly payment, dealer can take your vehicle. In that case, you will lose your car as well as the land certificate. You have 6 months at the most to enjoy your car, President Jokowi stated.

Evaluate your ability whether you can pay the installment every month or not. If you dont think you can do it, then dont take a loan, he added. (AIT/AGG/ES)