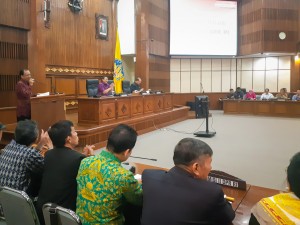 Governor of Bali Wayan Koster delivers remarks before members of the House of Representatives Commission II at the Office of the Governor of Bali, Denpasar, Bali, Monday (29/7). (Photo by: AGUNG/PR)

Bali Provincial Government in the 2019-2023 period is planning to build a ‘new era of Bali’ with the theme ‘Nangun Sat Kerthi Loka Bali, ‘ meaning maintaining sanctity and harmony of Bali’s nature to create a prosperous Bali.

“The plan aims to realize a new era of Bali that is focused on a balance of nature, human and culture based on the values of Tri Hita Karana,” Governor of Bali Wayan Koster said before members of the House of Representatives Commission II at the Office of the Governor in Denpasar, Bali, Monday (29/7).

The concept of the vision, he added, is a development that is rooted in local values ​which consider the sustainability of the environment and the people’s lives using local resources.

“Hence, the vision and mission that we carry out will focus on relationship between human, nature, and culture,” Koster added.

The governor added that in order to protect natural preserve, Bali Provincial Government has issued Gubernatorial Regulation Number 97 of 2018 on Single-Use Plastics Ban, including plastic bags, straws, and Styrofoam. “I find that people now bring their own shopping-bags. It is amazing to see how effective the regulation is,” Koster said.

According to him, since the regulation was implemented, the use of plastic bags, straws and other plastic products has decreased by 90%.

Bali Province also received appreciation and gratitude from various parties regarding the regulation, he added.

In terms of culture, Bali Provincial Government has issued a policy on the use of Balinese script in which government offices, private places, and public facility names should be written in the traditional script to preserve the cultural heritage.

In addition, the Government has also issued policy for the public to wear traditional Bali attire on certain days, including the tilem and full moon days and the anniversary of the Provincial as well as District Governments.

“The Gubernatorial Regulation Number 80 of 2018 on obligation to wear traditional Balinese attire should be applied to civil servants, private employees, hotel employees, teachers, as well as traders,” he said.

Koster further said that the policy has a positive impact on culture and people’s economy, shown by an increase in sales of traditional Balinese fashion up to 30%.

“We should maintain Bali’s nature since it is truly beautiful. That what makes Bali the center of world civilization that attracts world tourists to visit Bali,” Koster said, adding that the trademark of Bali is in its cultural heritage thus the local government should protect and advance the customs and cultural traditions.

Another effort taken by the Bali Provincial Government is to strengthen the role of customary village and administrative village. “The customary village is a pillar that will maintain and preserve the customs, traditions, and culture,”

He added that there are 636 administrative villages, 80 sub-districts, 1493 customary villages, which support the Provincial Government. (AGG/ES)