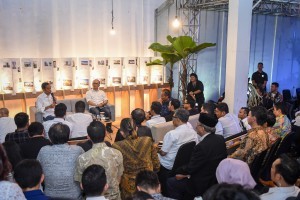 Bandung is ready to become Indonesia’s creative hub since it has a strong creative industry, according to President Joko Jokowi Widodo.

“Bandung has everything, including content creators, and is always open to the global trend, President Jokowi said during a meeting with Bandung creative industry players in Bandung, West Java, Saturday (10/11).

According to the President, what is needed now is a good ecosystem, not regulations, because too many regulations will limit the creativity in the industry.  “In my opinion, openness is good to stimulate new ideas and programs, especially for young people,” President Jokowi said, adding that he has instructed his Ministers to avoid stipulating ineffective regulations on digital economy and creative industry.

“(The regulation) should be made only when the industry players really need it, the President said, adding that more often than not, regulations do not support new ideas and limit them instead.