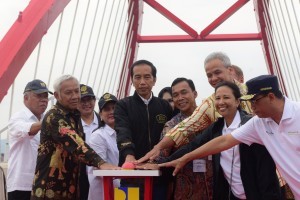 According to the President, the launch of the seven toll road sections marked the connection of toll roads from capital Jakarta to Surabaya  Indonesias second largest city – with a total length of 760 kilometers.

The President expressed hope that the operation of the Jakarta-Surabaya toll road will improve connectivity and efficiency of transportation in Java as people would have more choices to reach their destinations.

The toll road, he said, is also expected to boost the economy as it will be integrated with industrial areas, special economic zones and tourism areas. The Government will continue to push for investments in the integrated industrial areas and as a result, it will provide employment as much as possible, the President said.

In the meantime, regarding tourism, President Jokowi stressed that the Government will develop tourism destinations in the surrounding regions to attract more tourists. (RAH/OJI/ES)