Be Mothers of the Nation, President Jokowi Tells Indonesian Women 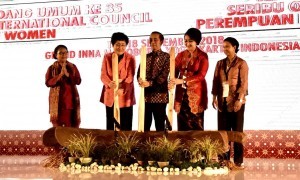 Indonesian women should become mothers of the nation, according to President Joko Jokowi Widodo in his remarks at the opening of the 35th International Council of Women General Assembly in Yogyakarta, Friday (14/9).

Mothers of the nation, the President said, are women who educate their children for the future of the nation, restore the spirit of the nation, uphold the principles of morality in families, protect the environment for the next generation and generate economic growth.

On the occasion, President Jokowi also praised women who have made significant contribution for the country long before Indonesian gained her independence. “We know several female freedom fighters: Admiral Malahayati, Dewi Sartika, Kartini, Christina Martha Tiahahu, and many others, the President said, adding that eight of his Cabinet members are also women.

The President went on to say that 12 of 31 gold medals for Indonesia at the recently-concluded 2018 Asian Games were won by female athletes. “We have spider women  Aries Susanti and Puji Lestari who won two gold medals on rock climbing. We have Lindswell, the queen of Whusu in Asia, who clinched one gold medal. We have many other female athletes who fought for our nation, President Jokowi said.

The President further said that Indonesian female athletes will also participate in the 2018 Asian Para Games,

“Nanda Mei Solihah won 3 gold medals at the ASEAN Para Games last year. Ni Nengah Widiasih was a weightlifting bronze medalist at Paralympic in Riau 2016. Suparni Yati, a shot put athlete, grabbed gold medal at the ASEAN Para Games 2017.  Laura Dinda has just won swimming competition in Germany, and many others,” the President said, referring to female athletes who will participate in the upcoming Para Games.

President Jokowi further said that Indonesia has many other women who have made significant contribution for the nation, including Sinta Nuriyah Abdurrahman Wahid, the wife of the fourth Indonesian President Gus Dur.