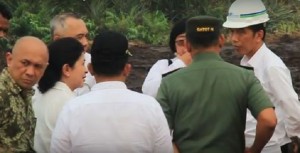 President Joko Jokowi Widodo called on the  people to be patient in facing forest and land fires.

The President affirmed that the Government continue to make serious efforts to tackle the problem by extinguishing fire through land and air.

He added that the President and a number of ministers as well as Commander of the Indonesian National Defence Forces (TNI) and Chief of the National Police (Kapolri) visited the location several times.

However, we need to be patient because the burned lands cover really wide areas, President Jokowi said to the reporters after watching the final of President Cup, at the Gelora Bung Karno (GBK) stadium, on Sunday (18/10) evening.

The President explained that the area of burned land and forest is broaden beyond normal conditions. Moreover, land fires are difficult to extinguish because it happened in the peat lands where  the flames is located under the surface.

He also said that the condition was worsened by the El Nino, which caused prolonged drought and the rain expected to help to extinguish the fires did not happen at all.

President Joko Widodo asserted that he always monitored the development of forest and land fires via field reports, satellite images and pictures taken from  the air.

The President took an example of the condition on yesterday afternoon when there were 942 spots all around Indonesia, including in Maluku and Papua.

Regarding the treatment to haze victims due to forest and land fires, according to the President, the Government thorugh related ministries have sent medicines assistance to the affected regions.

The assistance include 31 tons of medicines, 3.5 million masks. Hospitals and community health centers (Puskesmas) are instructed to stay open for 24 hours a day, the President said.

Therefore, the President added, the Government also provides shelters for the victims evacuation, thus, he said, people who suffered from an Acute Respiratory Infections (ISPA) could receive medical treatment. The President also asked the local governments at regencies, cities, and provincial levels, as well as the Central Government to cooperate with the people to extinguish forest and land fires.

I request TNI commander, the National Police Chief and the Head of National Intelligence Agency (BIN) to beware the situation that could be used to create an unrest, President Jokowi said.