Before Idul Fitri, Government Will Pay the Lapindo Bailout Funds of Rp 872 Billion 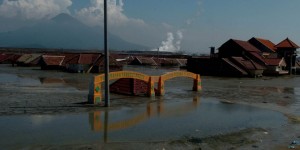 Before Idul Fitri, Government Will Pay the Lapindo Bailout Funds

The Government is determined to complete the payment of bailout funds of Rp 872.1 billion for victims of Lapindo mudflow in Sidoarjo, East Java, before Idul Fitri this year.

“Incidentally, I appointed as chairman, the Minister as a steering committee. Then there is a technical team echelon I, who will make an agreement with PT Minarak Lapindo Jaya (MLJ), Basuki said in Jakarta, Friday (15/5).

According to Basuki, the Lapindo mud bailout payment is based on the results of the verification conducted by the Financial and Development Supervisory Agency (BPKP).

“Using the results of the verification of BPKP that already reimbursed by Lapindo Jaya Minarak amounted 420 hectares with a total of Rp 2.7 trillion. Then to be paid again, based verification that there is Rp 827.1 billion, plus eight residents who need to be verified again,” Basuki said.

As we know that PT Minarak Lapindo obliged to return the bailout funds amounted Rp 827.1 billion in the period of 4 years, with the assurance of a map of land affected is owned by Lapindo.