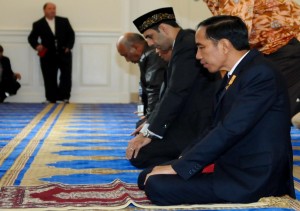 Before ending his working visit to the US, and according to the plan on the agenda, President Joko Widodo (Jokowi) visited the Mosque of IMAAM (Indonesian Muslim Association in America) Center located at 9100 Georgia Avenue, Silver Spring, Maryland, United States (US), Tuesday (27/10) at 15:20 local time on Wednesday (28/10) afternoon at 14:20 pm.

Upon arriving at the IMAAM Mosque, President Jokowi directly go around the mosque which consists of two floors.

On the first floor is a multipurpose room, where the President Jokowi greets a number of administrators and the people of Indonesia who have been waiting since noon, then the President looked at the library.

Furthermore, President Jokowi go to the second floor of the mosque to perform prayers. Because it has not entered Ashar time, so the President implements Tahiyatul Masjid prayer.

After perform prayer, President Jokowi took time to accept the request photographs with pilgrims and the people of Indonesia. The President also serves the demand of Indonesian citizens to take pictures selfie.

President Jokowi and the entourage leave IMAAM Center at 15:45 to the Blair House, where he was staying while in Washington DC.