Being Etalase of Indonesia, Jokowi Asks the Community to Oversee the Construction Project of Trans Kalimantan 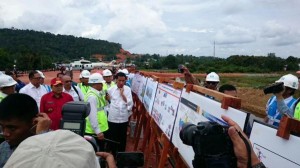 President Jokowi seriously listen to the explanation of the construction projects of Tayan Bridge and Trans Kalimantan, in Sanggau, West Kalimantan, on Wednesday (21/1)

President’s entourage arrived at 12.00 pm on Wednesday (22/1) by using 3 super puma helicopter. Besides First Lady Iriana, seem to participate in the review program among others, the Coordinating Minister for Maritime, Indroyono Susilo; Cabinet Secretary, Andi Wijayanto; Minister of Environment and Forestry, Siti Nurbaya; and member of the Presidential Advisory Council (Wantimpres) Sudarto Danusubroto.

The Tayan bridge connecting Tayan Island with Tayan District and Bisak areas. While the ultimate goal of infrastructure development projects in the province of West Kalimantan in Fiscal Year 2015 are the completion of the access road of Sajingan – Aruk (11,6km), Balai Karangan – Entikong (19.2 km), and Nanga Badau – Sarawak Boundary (3.8) km. All of these projects are the access to the border of West Kalimantan.

In his briefing, President Jokowi asked that the project be escorted and completed on time. “This border area will be used as an  etalase of Indonesia,” he said.

In a short visit to the construction project of Tayan Bridge, in addition to serve the local community to shake hands, President Jokowi also photographed together with the workers who handle the Project construction of Tayan Bridge and the Trans Kalimantan road. (Humas Setkab/ES)