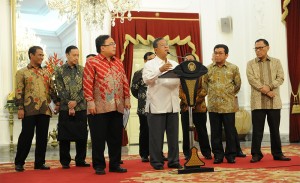 In a bid to support the First Phase Government action announcing the Economic Policy Package of September 2015, Bank Indonesia (BI) as the monetary authority also introduced new policies in September 2015.

The new policies are the ones that have been coordinated with the Government particularly, the  Central Government and related authorities especially Minister of Finance, BI Governor Agus D.W. Martowardojo said while announcing the policies after President Joko Widodo announced the First Phase Policy Package of September 2015, at the Merdeka Palace, Jakarta, on Wednesday (9/9) afternoon.

According to Agus, there are 5 (five) things prepared by Bank Indonesia in September 2015.

There are currently more than 430 TPI all over Indonesia which have already had inflation control roadmap. We want to ensure that a good coordination will be done for the implementation, Agus explained.

Coordination is required among Bank Indonesia, the Central Government, and regional governments, the Governor said.

4. Strengthening management of supply and demand of foreign exchange.

Completing regulations on money market covering all components related to market development, among others instrument, maker, and infrastructure. (ES/Humas) (JS/EP/LW/Naster)