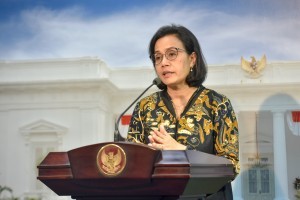 Following the depreciation of Rupiah, which has weakened to more than Rp15,000 per US Dollar, Ministry of Finance, central bank Bank Indonesia (BI), and Coordinating Ministry for the Economy will continue to  monitor the situation, Minister of Finance Sri Mulyani has said.

The new development will certainly be responded to by economic players, Sri Mulyani told reporters at the Presidential Office, Jakarta, on Tuesday (2/10).

The Minister also ensured that she would monitor indicators that sustain the national economy. For example, she added, she would monitor whether banking sector is strong enough and can adjust to the new exchange rate.

We notice that their capital adequacy ratio (CAR), the volume of non-performing loan, lending rate, and adjustment to the new current rupiah exchange rate until October are quite good, Sri Mulyani added.

The Minister added that the other indicator is real sector of the economic growth that still posts a high growth until the third quarter. According to her, even deflation in September declined and gross (income) from consumption and investment sectors, and to some extent, export and government expenditure which has reached 8 percent, also contributed to the deflation.

In terms of stability in general, Sri Mulyani expressed belief that Bank Indonesia will continue to manage this exchange rate so that it can guard the economy to adjust to a new level of equilibrium.

We hope (the stability) can be maintained by using all existing instruments, Sri Mulyani said, adding that her Ministry will use the State Budget (APBN) as a fiscal instrument to maintain the economy, including maintaining economic growth, improving stability, and protecting the people, particularly vulnerable communities.

The Minister also considered the fluctuation of rupiah as a case that must be observed accurately; yet, she noted that the adjustment of Indonesias economy to the U.S. monetary policy – which has affected the Indonesian exchange rate  has been running smoothly. The Minister also expected the adjustment can be well implemented as long as economic indicators can be maintained. (MAY/RSF/OJI/JAY/ES)(RAS/EP/Naster)