BI: Indonesia is Projected to Become Upper-middle Income Country in 2024 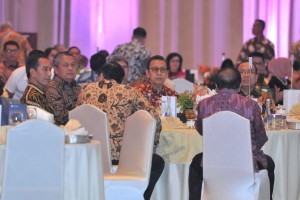 Improvement in economic growth is backed by strong domestic demands, both consumption and investment, while contribution of net export is forecast to improve as exports increase and export decrease, Perry added.

Regarding inflation rate, the BI Governor predicts that inflation will remain under control in 2019 within the 3.5+1 percent range by maintaining pressures from demands from volatile food and administered prices, as well as by maintaining inflation and Rupiah exchange rate.

On the other hand, the current account deficit will decrease to 2.5 percent of the GDP in 2019 as a result of measures to control imports and boost exports and tourism, he said.

Bank intermediation function and economic financing through capital market, the Governor added, will continue to improve, while credit growth is projected to reach 10 to 12 percent in 2019, and Third Parties Fund is expected to reach 8 to 10 percent with adequate liquidity maintained.

In the medium term, we project stronger economic growth within a range of 5.5 to 6.1 percent in 2024, Pery Warjio asserted.

According to Perry, acceleration in infrastructure development and in implementing a number of deregulation policies will increase economic productivity in the upcoming years.

In addition, stronger economic growth is also supported by several structural reforms with a focus on: (1) economic competitiveness, particularly in terms of human capital and productivity, (2) industrial capacity and capability to increase exports and reduce current account deficit, (3) making the best use of digital economy in order to stimulate broad and equitable economic growth.

By accelerating structural reforms in various fields, economic growth is projected to reach 6.1 percent in 2024 with current account deficit to drop to below 2 percent of GDP, Perry said.

For the record, the Bank Indonesia Annual Meeting, which was attended by President Joko Jokowi Widodo, heads of state institutions, ministers of the Working Cabinet, governors and regional leaders, executives of banks and non banking corporation, academics, economists, and representatives of international institutions, is an annual meeting where Bank Indonesia delivers its overview on the latest economic condition, challenges, outlook, and policies. (BI Communication Department/ ES)