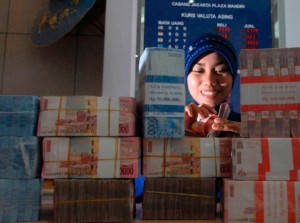 Despite the slowdown of economic growth continued in the second quarter of 2015, only grew 4.67 percent, Bank Indonesia (BI) predicts the third and fourth quarter 2015 the economy will improve.

“Economic growth weakened in line with varius indicators that are monitored in recent months and forecasts of Bank Indonesia,” said Executive Director of Communications Department of Bank Indonesia (BI) Tirta Segara in a press release on Thursday (6/8).

According to Tirta, economic growth in the second quarter 2015 is still slow down, especially driven by weakening investment growth, government consumption and household consumption.

“The weakening of investment growth in line with the implementation of government infrastructure projects that have not been as fast as forecast as well as the behavior of the wait (wait and see) private investors,” Tirta said.

Executive Director of the Department of Communications, Bank Indonesia was also noted, that the reorganization of some ministries / institutions (adjustment of nomenclature) influence the absorption of low government spending, so the government consumption is still limited growing.

As for household consumption, although still strong, but a little bit slowed down because of the influence of people’s purchasing power that declining.

On the external side, further Tirta, the export growth is limited due to the global economic recovery that not strong yet and commodity prices that still declining. On the other hand, import growth deeper contracted, in line with weak domestic demand.

Bank Indonesia predicts that the economy will begin to rise in the third quarter and continued in the fourth quarter of 2015. “This increase is supported by accelerated government spending in line with the realization of infrastructure projects that increasing,” said Tirta as he mentions it in line with the special efforts that undertaken by the government to accelerate the realization of capital expenditure, including by setting up a set of rules is needed.

Meanwhile, the consumption is also expected to improve, in line with expected the revenue increases and the implementation of local elections simultaneously in the fourth quarter of 2015. In addition, macroprudential policy easing is also expected to begin to have an impact on economic activity in the second semester 2015.

Tirta confirms, Bank Indonesia will continue to monitor the developments both domestically and externally, while strengthening the coordination with the Government to continue pushing the economic growth, while maintaining macroeconomic stability.

With macroeconomic stability, Bank Indonesia believes the Indonesian economy will grow at a higher rate on an ongoing basis. (Depkom BI/ES)